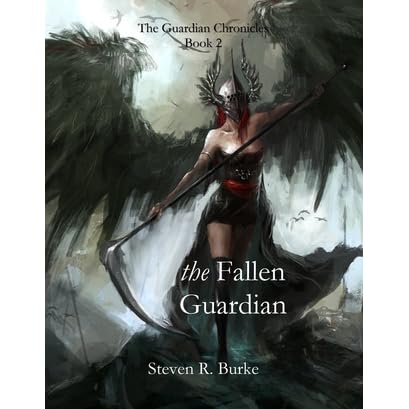 In order to help the races lean towards good, it was decided to bequeath to one of the race of dragons the power to be omnipresent in all beings of every race, knowing the deeds, desires, and motivations of all people, everywhere. That dragon became the first of the Guardians.

Vast wisdom and knowledge was granted to the Guardian, as well as much greater magical powers, a lifespan thrice that of normal dragons, and the ability to pass on their powers at the time of their death to an apprentice of their choosing. They were to use their powers and knowledge not to dominate the races, but to persuade them to live in peace with one another, and to make the world what the Gods had intended it to be. The Guardian Chronicles trilogy details a part of the history of Bremaria.

It specifically deals with a time of great upheaval and warfare which occurred almost a thousand years after the Guardians had finally brought true peace to the land. Deeply attached to Bremaria and its people, he had waited almost too late to choose an apprentice. In his haste to do so, he picked Trantyricus the Black, a young dragon of great power, ability, and charm.

But there was a darker side to the new apprentice, which his master knew nothing of the powers of the Guardian being limited in their ability with regards to dragons, as opposed to common mortals. Dismissing his troubling behavior as the arrogance typical of youth, Gangar taught his student how to experience the world through the eyes of its lesser inhabitants, as the Guardians themselves do. He hoped that in feeling firsthand the hopes, tragedies, fears, and love of others, his student's proud and arrogant nature would be tempered by compassion.

He was wrong. Trantyricus reveled in the suffering of others. And in playing with his victims, he finally discovered that he could also take complete control of them, and make them do his bidding. Using others to amuse himself, he eventually went too far, causing a conflict which resulted in the destruction of an entire city.

Gangar was horrified, and cast his student out. But it was already too late. Using his former master's teachings as a base to build his power, Trantyricus has, at the time our story begins, taken control of the Dark Races, which are more susceptible to his summons, and gone to war to seize all of Bremaria. But even that will not satisfy him. Knowing that only the Guardians themselves are powerful enough to control all sentient beings in the world, he now wages a constant magical battle against the old dragon, determined to destroy the magical shields surrounding and protecting Gangar's home in an attempt to capture his former master.

Trantyricus knows that if he can seize Gangar's powers from him, the raising of armies and the conquering of territory will be unnecessary. Trantyricus must be stopped fast, for his power grows daily. But now, he has made what could be a fatal blunder. In order to concentrate fully on the capture of Gangar, Trantyricus has taken into his service four apprentices of his own, and has given up to them part of his own power, so that they can control his armies and govern his holdings.


In answer, Gangar has chosen a group of heroes, warriors and mages which he has carefully nurtured over the years to fight evil,. Even with the tide of war turning in their favor, danger lurks in the mountains in the west. The Orb of Nitesh is being actively sought. Whoever possesses the power of the orb will win this conflict. What power could possibly stop the power of all the elementals?

Just as it appears that the guardians appear to be on the path of victory, the fallen guardian makes a deal with a long forgotten race.

The dark tide helps Kana tip the balance of power back in her favor. This unforeseen force wreaks havoc and makes their considerable presence known to all in their path.

Will Lord Adair be able to stand against this foe? The beauty surrounding his home town of Colville Washington inspired his world of Tuwa. Every character in his novels was inspired by characteristics from people he either knew or behavior he observed.